I woke up this morning hating my hair.

That was after I stayed up until 3 AM looking at length check videos on YouTube, crying. Yes, crying.

My hair and I have had ski 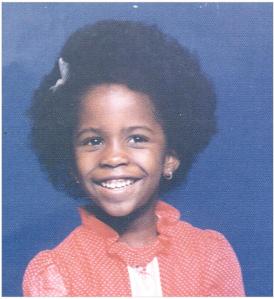 rmishes, battles and wars over the past three decades.As I struggle with trying to be natural (meaning my hair is free of any chemically-altering product), I cannot seem to find a style or a state that both my hair and I can be happy with. I’ve always had thick hair. But I have had trouble trying to achieve a decent length. To me, length + thickness = happiness. Is that too much to ask? I don’t think so. I mean, I’ve done it before at least once in my life.

Until November 2009 I was on the creamy crack, getting my hair relaxed every four to six weeks. Not only was this habit expensive (as is any drug habit), it was frustrating. I have very thick, coarse, coily hair (classified as Type 4 by natural hair care experts). My hair tends to grow fast (except for when I want it to…like now), so after a month I had enough new growth to require a touch-up. Any reputable cosmetologist would advise against getting a touch-up within the four-week window. The chemicals applied to the hair and scalp are potent enough to burn and cause injury, so why anyone would subject themselves to that on a frequent basis is beyond me. I say that now because I was blind, but now I see.

I used to call my hairstylist du jour every month like clockwork looking for a fix. Most times, the hairstylist would oblige and give me a touch-up. Some of the slick, savvy ones would coax me into letting them do a really good press-out of my roots. But there was one who wouldn’t let me have my way: Charles.

Of all the stylists I’ve ever had in my adult life (and trust, there are many), Charles ranks up there in my Top 2. Give him a hair dryer, a paddle brush, and a flat iron and he could do anything, up to and including solving crimes, balancing budgets, and most importantly, making me look fabulous. I would call Charles every month religiously asking for a touch-up appointment, and he would remind me every time, “You don’t need a touch-up as often as you think. You can get a blow-out, but not a touch-up.” Even when I whined and told him my head hurt because of all the new growth, he stood his ground with me, “No touch-up, Kim. None.”

It took a few years for me to realize what Charles was telling me was the gospel truth. But I still couldn’t divorce myself from the notion of needing a relaxer in my hair. At the time, my hair hadn’t been in its natural state since I was in the second or third grade. I had kiddie perms when I was younger, and even yes, the dreaded Jheri Curl. It seemed that my hair behaved better when it had chemicals in it. It would lay straight or hold a curl, or on occasion, bounce and behave.

In my sophomore year of college I discovered the wonder of fake hair. For $9.99 I could get a clip-on or a drawstring ponytail, and for another $2 I could get a jar of hair gel to slick my hair back. I rocked a fake pony for most of the school year, washing and slicking it down every week. During that time I found that I didn’t need to relax my hair as much. That spring after the weather broke, I grew tired of the clip-and-go look. I relaxed and washed my hair one day only to discover that I had shoulder-length hair! You couldn’t tell me anything. That’s when I started showing off, curling it, pinning it up, trying to be cute. And my hair, like a hostage desperate to escape, broke off strand by strand and jumped ship. Pretty soon, I looked like the before picture in those Dr. Miracle ads.

Two years ago when I was planning my wedding, I wanted to have long, luscious, Rapunzel-esque hair on my big day.  As every bridezilla would do, I brought my stylist du jour, Kia, a picture of the exact updo I wanted. Kia didn’t like it. At the time I couldn’t figure you why she was so resistant. But the day before my wedding, I realized she couldn’t do an updo to save her life. She created some crazy-looking geometric sculpture that was bogged down with enough hair pins to short circuit the metal detector at the airport. At my rehearsal dinner, my little sister and maid of honor Shani, said she couldn’t take it anymore and started trying to dismantle the Leaning Tower of Weave-za. My cousin Bridget aided in this heroic effort. They knew what the hairstyle needed to look like and tried their best to restyle it. Shani got my old beautician, Dawn, on the phone at 10 p.m. that night and explained the situation. Dawn told Shani to get me to the salon at 6 a.m. the next morning to redo my hair. She created the hairstyle I envisioned without even looking at the picture in my bridezilla binder. Dawn is simply gifted. She reused tracks from the Leaning Tower of Weave-za and with a lot less bobby pins, made me look beautiful. (Dawn is my other Top 2 hairstylist).

I haven’t had a touch-up since.

Since then, I’ve been terribly disappointed by the lack of hair growth when I’ve worn my hair out. I expected to have at least chin-length hair. Instead, it’s probably about the same length as it was when I stopped getting relaxers. (Before you even ask, yes, Virginia, I do trim my ends. )I had been trying to reason with my hair and take better care of it, but it chants on top of my head incessantly, “Hell no, we won’t grow!” All I want is enough hair to rock a decent-sized curly Afro, or to wear a bob if I choose to press it out or blow it out every now and then. Instead, my coarse and coily hair continues to rebel.

Fast forward to last night. I was contemplating my next hair move, and so I did what any tech-savvy black girl would do, I went to YouTube. I started searching for “length check, two years” as I felt that would give me a good gauge of where my hair could/should/would be. Big mistake! I watched video after video of natural sistahs stretching their curly tresses down to their chins, to their shoulders and backs. I started crying, “why won’t my hair grow like that?” I felt like such a failure.

The other day my hair said to me, “Girl, you gotta get these twists off of us. They’re getting on our nerves!”

That’s the first thing in a long time that we’ve agreed upon.