As an avid reader, I almost always have my nose in a book. Sometimes I’ll be reading more than one book at once, reading a few chapters of one and then switching to the other for a few chapters. Despite my undying love for books, there are not too many books that affect me in such a way that they change my life.

However, The Known World by Edward P. Jones is one of the books that changed my life.

I had been introduced to Jones’s works through the Writing Program at JHU. In one of my fiction writing classes, I read “The Girl Who Raised Pigeons,” a short story from his collection Lost in the City. I aspired to write about Baltimore the way Jones wrote about his native Washington, DC.

It was during the fall of 2009 when I was in a fiction workshop that I got another introduction to Jones. I had submitted my first set of manuscript pages for workshop, and was nervous about the feedback I would get from my classmates and my instructor. I was stunned when my instructor pointed out, almost immediately, that the opening chapters of my historical novel reminded her of the Pulitzer-prize winning novel The Known World. I was floored! At the time, I had heard of the book, but had not yet read it. I ordered the book with the intention of starting it while on Thanksgiving break.

From the first page, the opening paragraph, the first sentence, I was hooked. Jones’s gorgeous prose and compelling characters drew me into a world I never knew existed. Without giving too much of the plot away to those who have yet to read The Known World, this novel is about former slave Henry Townsend who becomes a slave owner in fictional Manchester County, Virginia, and the people on both sides of slavery. There were many sentences, chapters and moments in the book that swept me off my feet and took my breath away. To have my own unpolished writing compared to his was a tremendous compliment, and at the same time quite intimidating.

I started The Known World that Thanksgiving weekend, and finished it a few days before Christmas. The ending was so breathtakingly beautiful that I wept, my tears staining the last pages. Everything in the book made sense and was tied up, but not in a contrived way. It was pure and logical. Intrigued by the man and this book, I scoured the internet for anything I could find. In one interview before he won the Pulitzer, Jones said that he had the book floating in his head for several years. Once he left his job as the editor of a tax newsletter, he wrote the novel (it’s 388 pages in paperback) in three months. However, the ending he already written. He said, in fact, that most of his story endings, he knows and writes ahead of time.

I revisited The Known World several times trying to deconstruct elements of it to learn from the master. The story of The Known World isn’t told in linear fashion. There are several secondary storylines running concurrently with the main one. And there is an omniscient narrator hovering overhead informing the reader of every single detail down to the thoughts of each character. When I started working on my novel, I had an omniscient narrator, too. I was dismayed when my instructor and classmates shot it down. “It cheapens the experience,” my instructor said. “It’s a device used by lazy writers.” Well, Edward P. Jones isn’t lazy. I tried rewriting portions of my novel using a third-person narrator, but there were details that they couldn’t share because there were things they couldn’t know. Only my omniscient narrator – who was about to be laid off by my instructor – would know! I kept plugging away attempting to restructure my novel using the third-person narrator, which stifled me greatly. 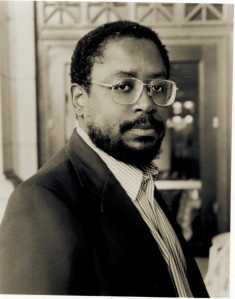 Imagine my delight and surprise when my workshop instructor called me a year later to tell me she had invited Edward P. Jones to speak to her class. She asked me if I’d like to sit in. I told her I was already there.

Meeting Jones in person was a moment I will cherish for the rest of my life. It is not every day that a reader gets to me his or her favorite author and engage them in a conversation about craft. Armed with his books and a writing journal, I was prepared to ask questions and take notes.

There was so much that I learned from Edward P. Jones on that evening. It affirmed me as a writer to be in his presence and relate to his thoughts and perspective on writing. I strive to tell my story as well as the stories of our people and the culture. Edward P. Jones is a master at that. For Black History Month, I will be re-reading The Known World to commemorate our history, our heritage, our culture and our literature.

“Fiction,” Jones said, “[is] adding wonderful sauce to all of the lies so the reader will be able to swallow.”