I have heard a lot of buzz about Pike’s Diner in Pikesville. “It’s an experience,” one person told me. Someone else said, “Girrrrrrrrrrrl, you gotta try their Henny Penny Fried Chicken.” So my husband and I ventured to Pike’s Diner recently to see what all the buzz was really about.

We pulled up to the restaurant on a cold, rainy Sunday morning after church. We were a little concerned that the parking lot was almost empty at that time of day. Where was everybody? Surely people were out and about looking for a good, hearty weekend breakfast at 10 in the morning.

I didn’t quite know what to make of the Hollywood-on-steroids décor. Life-sized figures of the Blues Brothers looked down on the dining room that was full of movie memorabilia and blinking lights, but sparse on diners. Walking to our table (the hostess told us we could sit anywhere), all I kept thinking was that Gordon Ramsay or Robert Irvine would love to rip a place like this apart and rebuild it.

Being a french toast connoisseur, I ordered their French Baguette French Toast, along with a side of bacon and breakfast potatoes. What I ended up getting was an order of cinnamon with a side of french toast. The flavor was overpowering, and quite disappointing. The texture, which should have been rich, light and eggy was dry and just plain sad. The baguette slices were not soaked in the cinnamon-egg batter long enough, leaving the middle dry and uncooked. If only they had let the bread soak in the batter just a few minutes longer. Insert sigh… 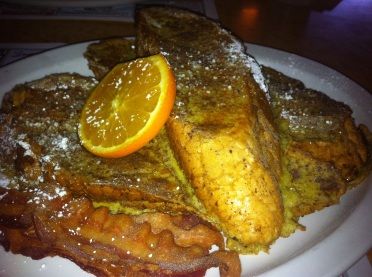 My husband ordered eggs, bacon, potatoes and toast. Neither of us enjoyed the potatoes. They had a strange gritty quality. I wondered if they had been reheated.

It’s a shame that Pike’s Diner didn’t meet my expectations. The diner is in an excellent location and has a lot of potential. I’d really hate to say it’s past its prime, but it’s definitely not a go-to spot for a weekend breakfast 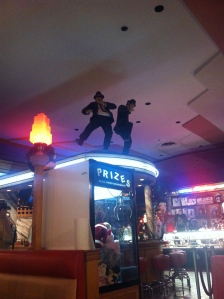